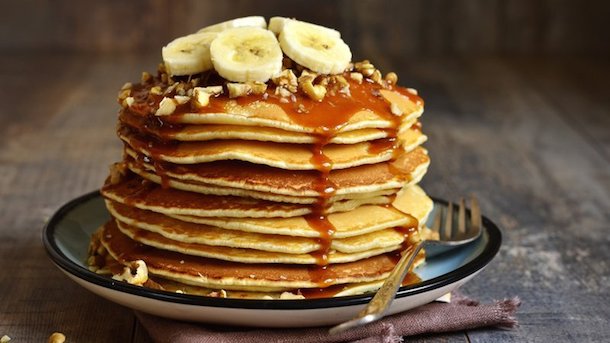 This is a very simple recipe for a basic pancake mix. It’s best made the night before Pancake Day as this help the batter and will give better results. Like many families we always enjoy pancakes and then wonder why we don’t have them more often than once a year. You can fill them with virtually anything sweet or savoury, the choice is yours!

Why do we eat pancakes on Pancake day?

In Christian traditions, the 40 days before Easter are known as Lent, and they mark the time that Jesus spent fasting in the desert. Traditionally, Christians would mark the period with prayers and fasting, abstaining from a whole range of foods, including meat, eggs, fish, fats and milk. The word ‘shrove’ comes from the old Roman Catholic practice of being ‘shriven’ – meaning to confess one’s sins. The shriving bell would be rung on Shrove Tuesday to call people to church to confess.

Before Lent could begin in earnest, all edible temptations needed to be removed. This took place over a period of days known as ‘Shrovetide’. Meat such as bacon would be eaten up on ‘Collop Monday’ (a collop is a thin slice of meat). And on Shrove Tuesday eggs, butter and stocks of fat would be used up. One of the easiest ways to dispose of these items was to turn them into pancakes or fritters, a custom which continued long after the Church of England separated from the Roman Catholic Church in the 16th century.

The Monday and Tuesday before Lent were periods of great festivity before the coming days of abstinence. Children would go ‘Shroving’ or ‘Lent-crocking’ on Shrove Tuesday (or the night before), knocking on their neighbours’ doors and singing: